Going through a dictionary, we come across some specific symbols written in slanting bars like /ɪə/ when we look for the word ‘ear’ & /jɪə/ or /jəː/ when looking for the word ‘year’. These symbols are known as Phonetic Transcription which represents speech sounds of the language. These symbols are created by International Phonetic Alphabet to have one to one correspondence of words & sounds.

The language we use is a very complex system. The study of any language is thus, a study of different complex systems within a language. These systems are studied at different levels. These levels are technically known by different terms like:

Phone is an alternative word for sound. However, scientifically it can be defined as “The phone is the smallest unit of speech sound distinguishing one from another”.  Whereas phoneme is distinguishing speech sound in a language that may change a word or meaning. For example: sound /s/ & /z/ in English. If sound /s/ is added to the word table, it changes the meaning of the word.

Any language acquisition begins with listening and producing sounds (phones and phonemes) of that language. The study of the sounds that can be pronounced by human beings is called Phonetics. Phonetics studies physiological features and functions. It includes analysis of speech sounds at three levels. 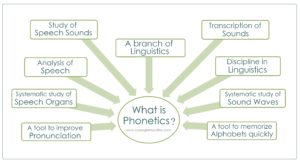 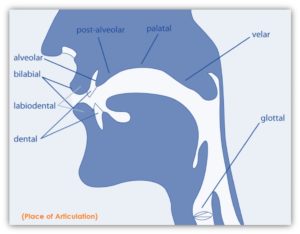 This section of phonetics investigates the use of different speech organs to produce speech sounds. For example, while pronouncing the word ‘bat’ we use our lips, throat, and a certain way to release air from our lungs. The physical limbs of our body are responsible for the articulation of certain speech sounds. These are known as ‘Vocal apparatus’ or ‘vocal tract’. This includes the lungs, larynx (vocal cords), nasal cavity (nose), & oral cavity (mouth). The mouth further includes lips, tongue, teeth, jaw, & soft palate etc. These are also known as place/s of articulation. However, the way in which we release or take in the air to articulate sounds is known as the manner of articulation. This helps further to classify different sounds.

Sounds in a language are classified into three categories:

1. Vowels: speech sounds articulated without any obstruction in our airstream mechanism or vocal tract. The number of vowels may differ in different languages. For example, /e/, /i/, /u/, /u:/ etc. In English, there are 12 pure vowels. These are as follows:

3. Consonants: these are sounds that are articulated with obstruction in the ‘airstream mechanism’ or the ‘vocal tract’ and the release of the air. For example, while pronouncing the sound /f/ our lower lip & upper teeth come together to hold air in the mouth and then it is slowly released. For the sound /b/the lower and upper lips come together to compress the air and release suddenly. There are 24 Consonants in English.

1. Better listening and understanding: If one knows the phonetics well, it’s for sure that s/he will be able to listen and understand the language better. It is because the knowledge of the sound patterns helps the listener to distinguish between similar-sounding utterances. Secondly, the speed with which the utterances are spoken can easily be catchup by the listener.

2. Fluency in speaking: Of course, knowing & practising phonetics will help in the articulation of the speech sounds in a faster way which will result in speakers’ fluency. Though it is not the only factor that enhances fluency but still, the speed and pronunciation will be faster.

3. Confidence: The knowledge and the practice of phonology result in the rising confidence in the user of the language because of the reasons cited earlier.

4. Impact on the correct use in writing: studying phonetics helps improvement in writing as well as it will reduce spelling mistakes and errors caused by spelling & pronunciation discrepancy.